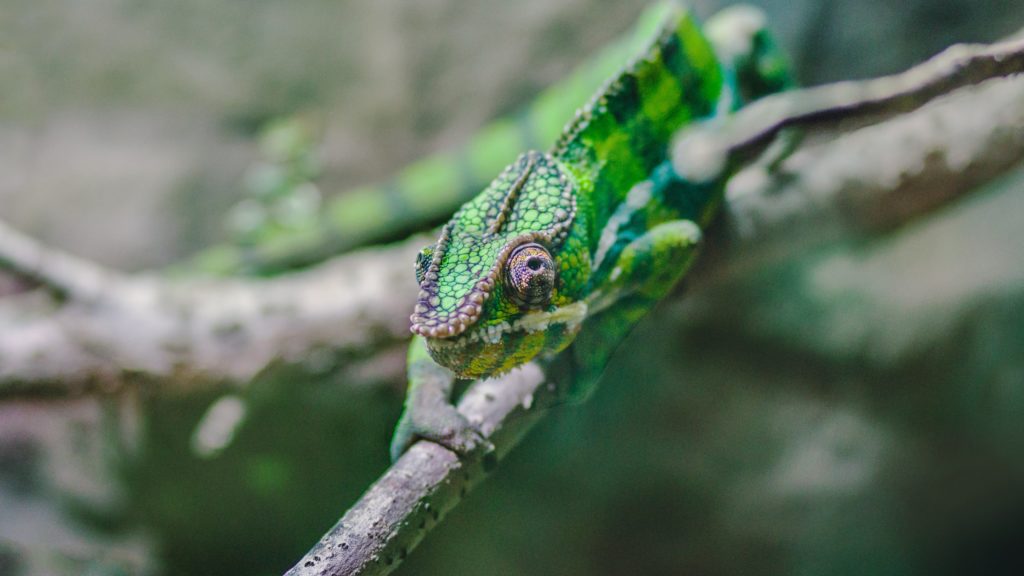 A lot of people think chameleons change their color based on their surroundings – sort of like camouflage. However, this isn’t true.

Chameleons actually change their color due to a number of different factors, including their mood, changes in light or temperature, or the humidity of their environment.

Different chameleons will also have different colors. For instance, more dominant, attractive males will have brighter colors, and submissive males may be darker browns and greys. Women will change their colors based on whether they want to accept or reject a suitor.

So if you can’t find a chameleon because it is blending into its surroundings, just turn the lights on and you’ll be able to find it! (It might have been useful to have the lights on in the first place, though.)

2. Chameleons have eyes in the backs of their heads

Well, not literally – but they can move their eyes separately, with each eye having a field of 180 degrees. This means they can see 360 degrees if they need to!

This is useful because it means they can see predators coming from behind them, giving them a chance to scarper if they’re about to get caught.

Compare this to humans: our eyes are on the front of our heads, giving us a narrower field of vision, but a better perception of depth. This singles us out as more predatory than our chameleon friends – though as we’ll see, they also have vision excellently adapted to being a predator.

Sometimes it might be useful to have 360-degree vision, though – nobody likes being sneaked up on! 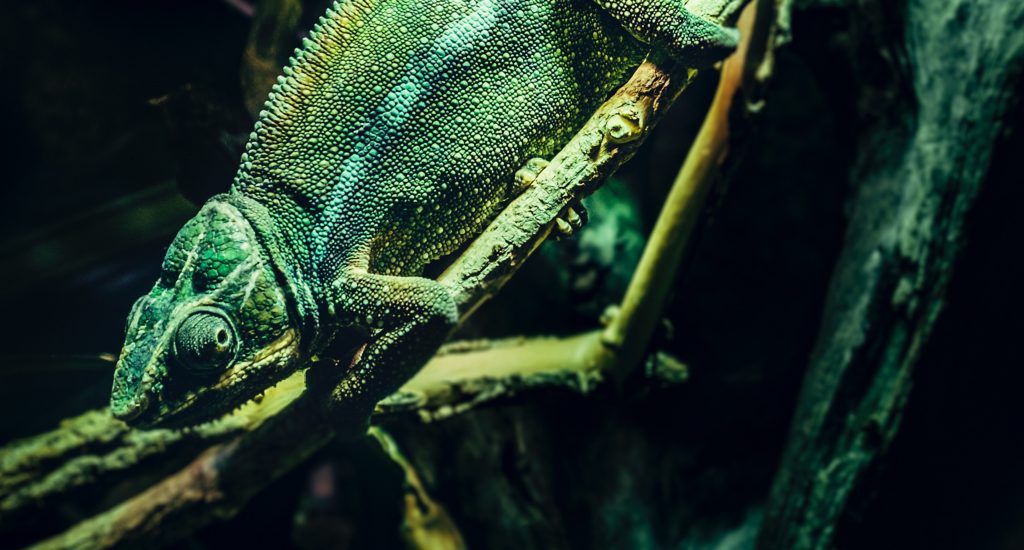 59 unique species of chameleon live on the island of Madagascar and are found nowhere else. This is over a quarter of the world’s 202 species.

This might not come as a surprise to those who know that 90% of the wildlife found on Madagascar is found nowhere else on Earth!

Aside from this, chameleons like to live in warm, tropical regions. Don’t we all? You can find them predominantly on the mainland of sub-Saharan Africa.

4. Chameleons come in a lot of different shapes and sizes

The largest chameleon by length is the Malagasy giant chameleon, also known as Oustalets’s chameleon. Some members of this species have been measured at almost 70cm, and are one of the species endemic to Madagascar (meaning they don’t naturally live anywhere else).

At the other end of the scale, you have the Brookesia Micra chameleon, also from Madagascar. These tiny little fellas grow to a maximum of just under 30 millimeters.

These minuscule chameleons are one of the smallest reptiles in the world, and juvenile chameleons can fit on the head of a matchstick. Very cute – but be careful to watch where you’re walking!

Excluding their tail, some chameleons’ tongues can be twice the length of their body. Their tongues consist of both muscles and bones and can bend round to grab their prey.

Chameleons’ tongues are extremely quick and powerful, sometimes exceeding accelerations of 41g. This means they can grab their prey within fractions of a second, making it impossible to get away. If humans could do this, it would make grabbing that last biscuit from the tin much easier! Unfortunately…

6. Most chameleons eat things you wouldn’t want to find on your dinner plate

The majority of chameleons survive by eating insects, and some complement this diet by feeding on foliage and fruits. Some larger species eat up to 50 large crickets every day.

Others may be a little more carnivorous, and feast on small birds and even other, smaller chameleons.

So while it might be useful having a tongue that can shoot out and grab cookies, you probably won’t want to use it to eat a chameleon’s diet.

Most chameleons like to set up camp in trees, and as such are highly developed to traverse trunks and branches.

They have five toes on each foot that are grouped together into bigger bunches, with the toes on the hind feet reversed. These feet allow chameleons to grip on to rough or narrow branches with ease, aided by the sharp claw on each toe.

Chameleons also have prehensile tails, which means their tails are highly adapted to gripping on to branches and allowing them arboreal locomotion, or, in layman’s terms, a life living in the trees. Chameleons’ tails are able to curl several times around a branch, helping them to balance and hold on. 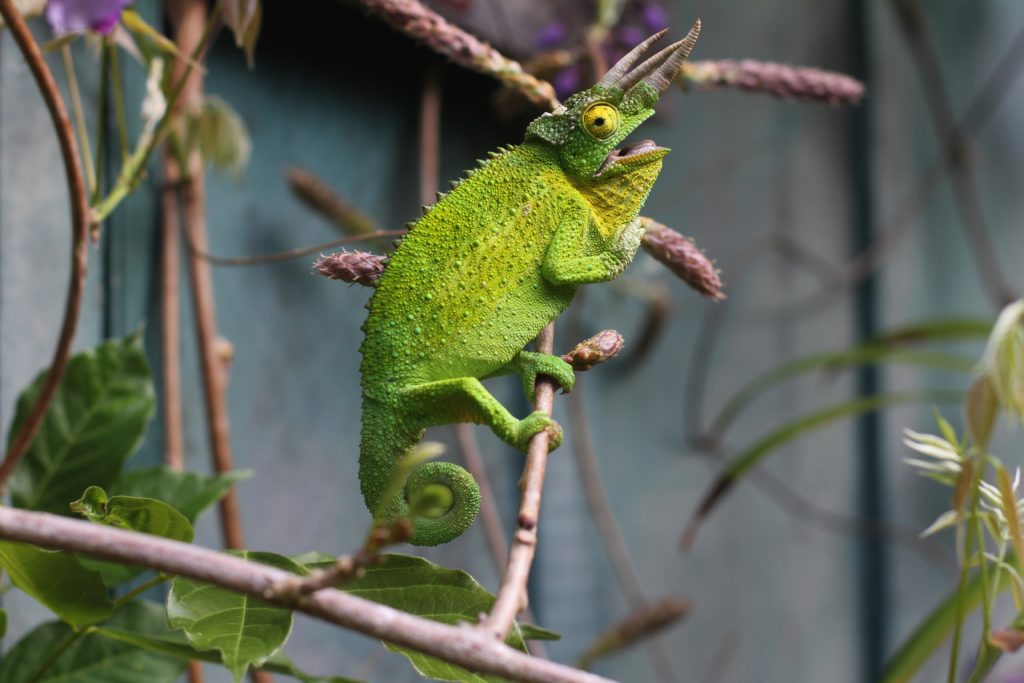 8. We all know that guy who likes to show off…

Like most animals, male and female chameleons look different. Though not particularly social animals, males usually have horns and spikes, while females don’t.

Not just for show, though, these bodily decorations are used when a male has to protect its territory from another chameleon, and some of the spikes can help them blend into their environment.

9. Chameleons have good eyesight for a lizard

Chameleons’ eyesight has developed both to help them catch prey and, as we’ve seen, to help them escape predators. They can focus their eyes relatively well, meaning they can judge distances and spot prey between 5 and 10 meters.

Though they may have relatively good eyesight, chameleons have poor hearing, only able to hear noises between 200Hz and 600Hz, something you might wish you had when the person next door is keeping you up all night.

10. Chameleons take a while to hatch and don’t live very long

Most female chameleons dig a hole to lay their eggs in, and the fetuses develop in the egg. These eggs can take anywhere between 4 and 12 months to hatch, with baby chameleons looking like smaller versions of adult chameleons. Some eggs from the Parson’s chameleon can take as long as 24 months to hatch. The number of eggs depends on the species and can range from just 2 or 3 to as many as 200.

Generally, chameleons don’t live very long – some for up to 10 years in captivity, with some dying after as few as two years. A chameleon who lives in the wild will almost always live a longer, healthier life than in captivity.

Are you the owner of this fascinating reptile? Tell us about your experience as a chameleon owner in the comments below!