Cats and dogs make our lives better. From reducing stress to being loyal companions, our pets are precious little beings who manage to bring us so much pleasure and joy. Think you know your best friend inside and out? Well, take a look at these 13 facts about cats and dogs which will make you appreciate yours even more.

The first house cats were not intentionally bred to become domestic pets. Researchers believe that our feline friends initially chose to live near humans purely as a method of survival. 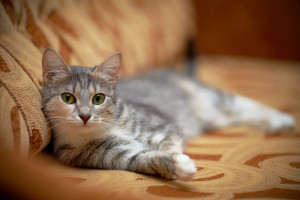 When humans formed agricultural      societies, wild cats discovered that rodents were attracted  to granaries and farms so, naturally, they chose to hang  around for a few free meals, too. With a common enemy,  a new relationship was formed between humans and cats  who eliminated pesky rodents. Early felines felt  welcomed on farmlands, shed some of their aggression  and, eventually, forged new friendships with equally non-  aggressive humans.

2. Cats Walk on Their Toes

There’s a reason why you’ve never heard your cat walking across a floor. As natural hunters, cats rely on great speed and flexibility. Walking on their toes helps them with speed and it probably doesn’t hurt that they can move on prey in silence.

3. Cats Can Make as Many as 100 Different Vocal Sounds

A cat’s vocabulary consists only of a simple meow. However, the frequencies used with every one of these will
vary according to a cat’s mood and what it is she wants at that moment. From cries for affection to demands for food, our feline family members are quite advanced in their vocalization techniques in comparison to other domestic pets. For example, dogs only have about 10 different vocal sounds. 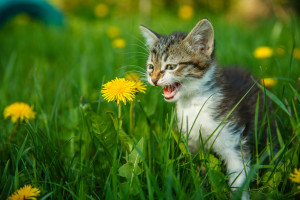 4. Adult Cats Only Meow For Humans

One study at Cornell University suggests that cats use different vocalizations to get what they want from humans. Cat lovers didn’t need a study to confirm this since we know exactly what kitty wants from the tone of her voice, right? While meowing isn’t language, per se, it is a very effective way of communicating that cats only reserve for humans.

There is evidence to suggest that cats can retain short-term memories for up to 10 minutes as long as those memories are created through performance. For example, when led to step over an obstacle along a path, cats will form a short-term memory of the obstacle’s presence by the activity of lifting all four legs in order to pass over the object. This is a pretty noteworthy fact as other domestic pets don’t have this same ability.

6. Cats Can Taste the Air

Ever noticed that strange look your cat sometimes has on his face as he sniffs the air? No, he’s not sneering at you, but he is up to something. Through a controlled method of breathing known as ‘taste-scenting’ your cat uses an organ located between the roof of the mouth and the nose’s septum to taste the scent of another cat in the air.

The wetness on a dog’s nose is actually a layer of mucous used to absorb scents. Dogs then lick the scents off of their noses to taste whatever is in the air.

8. A Dog Can Hear Sounds Up to Four Times Farther Than a Human Can


Our canine companions can also hear far more frequencies than we do. The shape of a dog’s ears help tremendously in amplifying sounds much like you may be able to do simply by using your hands to form a cupping shape around yours when you want to amplify sound. 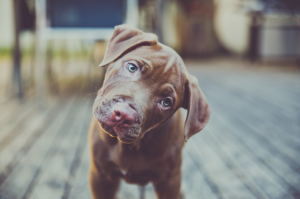 If you’ve ever watched your dog’s ears move  around like little satellite dishes, it’s because he’s  positioning his ears just right in order to maximize  sounds and frequencies you probably can’t hear.

9. Some Dogs Are Early Warning Systems For Health Issues

Studies as to how dogs do so are inconclusive, but some are able to sense changes in a person’s body chemistry just before a seizure occurs. This same alert system has been known to detect cancers and has been useful in alerting individual diabetics when sugar levels are out of normal range. Researchers believe that dogs accomplish this through a keen sense of smell which can detect subtle changes in the body’s chemical makeup.

Contrary to popular belief, dogs can see colors. While they can’t see a full color spectrum, they do see more than just black and white as previously thought. In addition to black and white, most dogs can also see yellow and blue.

Some scientists believe our fur buddies might even outrank our own sense of smell by up to 100,000 times! Where dogs may lack the ability to see all of the vivid colors that we can, they certainly make up for it by being able to assess their environments through powerful olfactory senses. 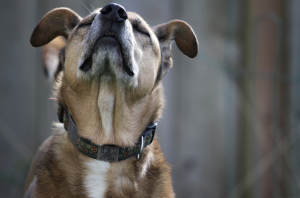 That they are able to discern scents that wecan’t even detect, is why dogs are used to track missing people and alert authorities of contraband. Bloodhounds are often used for this purpose since their long floppy ears actually help fan scents closer to their noses, thus making them experts at tracking various scents.

You may be able to tell your dog apart from every other in his breed, but other people may need to rely on on his nose print for identification. Similar to the human fingerprint, no two dogs have the same nose print. While so many pet owners rely on microchipping for identifying a missing pet, breeders and trainers have been known to also keep a dog’s unique nose print on file for their own identification purposes. 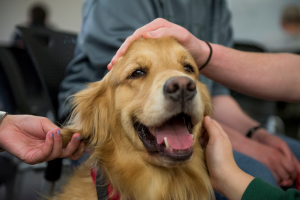 For decades, research has supported the idea that pets help improve a person’s overall well-being. From lowering high blood pressure levels to helping people recuperate from major illnesses, cats and dogs have been remarkable at helping lift human spirits and reducing stress. In fact, many pets have made entire careers out of  doing just this as they’ve been used in therapy  settings to help people in hospitals, prisons and  nursing care homes cope with difficult circumstances just by being their lovable selves.