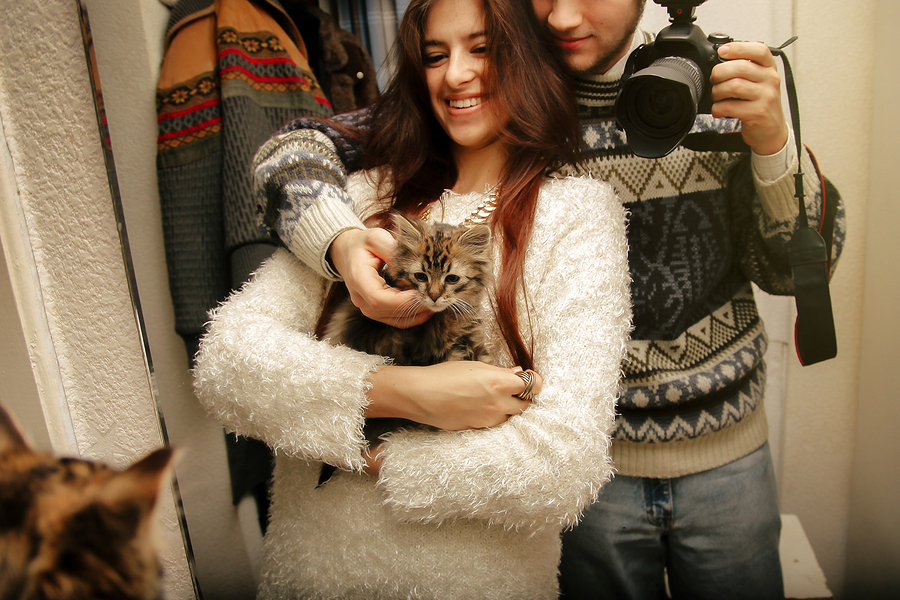 That cute kitten was simply irresistible, so you are adding a new feline to the family. Or maybe it is an adult cat that caught your fancy and will be moving in. Either way, know that the introduction to a new space could be tricky for both you and the cat, particularly if you already have pets — and 62 percent of pet-owning households do have more than one pet, according to a 2012 demographic study by the American Veterinary Medical Association.

When pets don’t get along, it can cause their owners great stress. With that in mind, we offer this quick guide on how to introduce a new cat into its new home — plus to current pets and even the baby — while also keeping the peace.

Cats like confined spaces and hiding places in which they feel safe, and initially could be overwhelmed in the big, wide world that is a new home. So welcome your cat in a “sanctuary” room — such as a den, spare bedroom or even the laundry room — for at least the first week until it adapts to being in a new place. This holds true whether there’s a pet in the home already or not. Provide food, water, a litter box, a scratching post and toys. If there aren’t already hiding places in the room, cut some holes in boxes to create some. Cutting at least two holes in a box provides that alternative escape route that cats seem to like.

Let your new cat warm up to family members gradually with gentle interaction and perhaps by also using clothes as bedding so the cat becomes familiar with everyone’s scent. Introduce play a couple of days later. Make sure the cat is eating well and drinking. When your cat seems ready, let it explore the rest of your home at its own pace. For kittens, this may take more than a couple of weeks. When it is comfortable roaming the home, move the litter box to its new, permanent location. 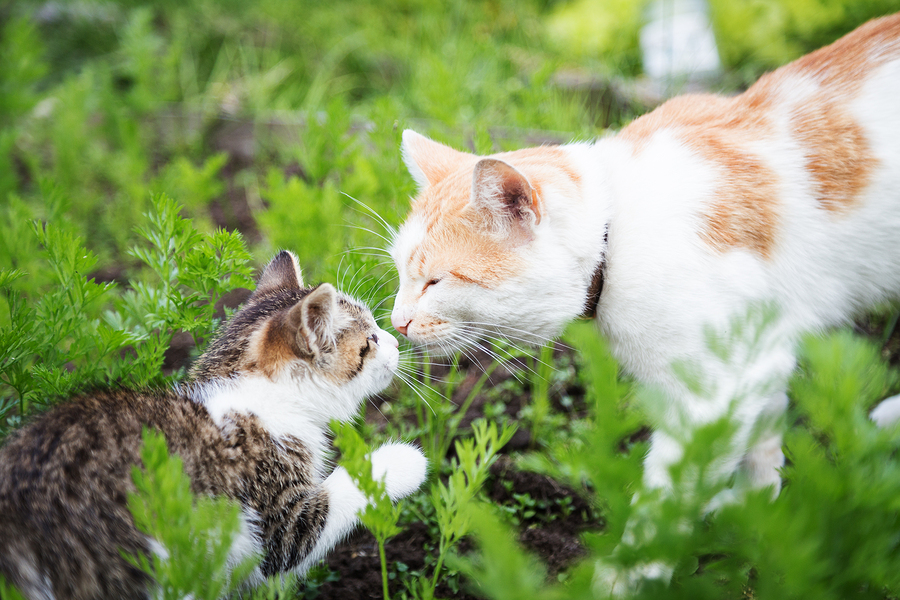 Introducing the New Cat and the Resident Cat

Cats are territorial by nature, so it’s important to keep your new and current cats apart for at least that first week. Allow your current cat(s) to first get used to the new cat’s scent. This process can be aided by brushing them with the same brush, rubbing each one with a towel or blanket and then leaving it in the other’s space, or even switching their spaces to let them explore the other’s spot. Let them “visit” or play “paws” on opposite sides of the door, and give them a treat — or even make this the regular feeding spot — so each will associate the scent of the other cat with a pleasant experience. A face-to-face introduction is not recommended at this early stage, however. Throughout this period, your current cat may hiss or hide, or be more aggressive toward you — or even ignore you. Eventually, acceptance should kick in, however.

When it’s time for the cats to meet face-to-face, either let your current cat into the “sanctuary” room or use a neutral space. Make sure each cat has an “escape” route, and be prepared to break up a fight, protecting your hands and arms with a blanket or towel. There may be some hissing or posturing, in which case this activity will have to be repeated at a later time.

Don’t force the introductory process, which could take weeks. Let both cats proceed at their own pace to better the chances for a future harmonious relationship. Pay attention to body language to decide when to move on to the next step. Also, give the resident cat extra attention during this period so it doesn’t fear that its social status is threatened. For the first few weeks, don’t leave the cats alone unsupervised. There are a couple more points when it comes to how to introduce a kitten to a cat: Because of their size difference, don’t let the older cat play too rough, and keep in mind that a kitten could be intimidated easily, making the process take longer. 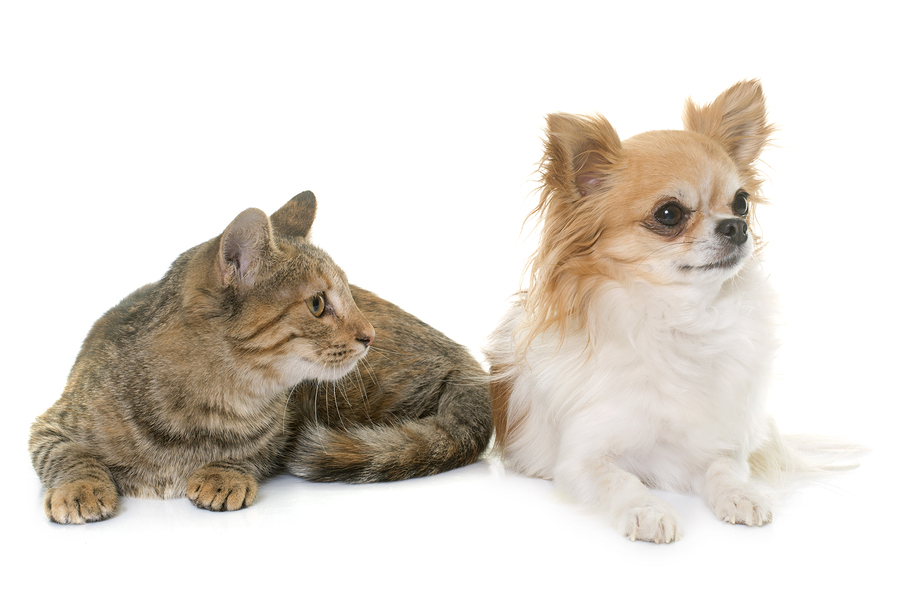 How to Introduce a Cat to a Dog

You want tails wagging, not tales of woe, when cat meets dog. The good news is cat-to-dog introductions tend to be less adversarial than cat-to-cat meetings. The same avoidance of face-to-face interactions for the first week applies, however, as do the methods for sharing scents and feeding near the “sanctuary” door so the pets relate each other’s scent to positive things.

For their initial face-to-face meetings, the dog should be leashed or caged so the new cat can dictate the terms of the introduction. This will also protect the cat if the dog has strong hunting instincts or likes to chase whatever runs. Make sure the cat has an escape route, and reward your dog for not being aggressive. You can even tire the dog to some degree by walking it first. Let the pets sniff each other. If either appears aggressive, separate them and try again the next day. If the sniff fest goes OK, repeat these meetings several times before determining the pets will respond well when they are unsupervised.

As you follow the suggestions of how to introduce a new cat to a dog, keep in mind some dog breeds just will not respond well to living with a cat. That’s nature. Take extra time for the introductory phase if this is the case. Use food treats to reinforce good behavior. Try not to scold the dog for bad behavior, as the dog will associate the cat’s presence with a negative experience. Also, keep cat food where the dog cannot reach it, keep the cat out of the dog’s food, and don’t let the dog nose around the cat’s litter box. 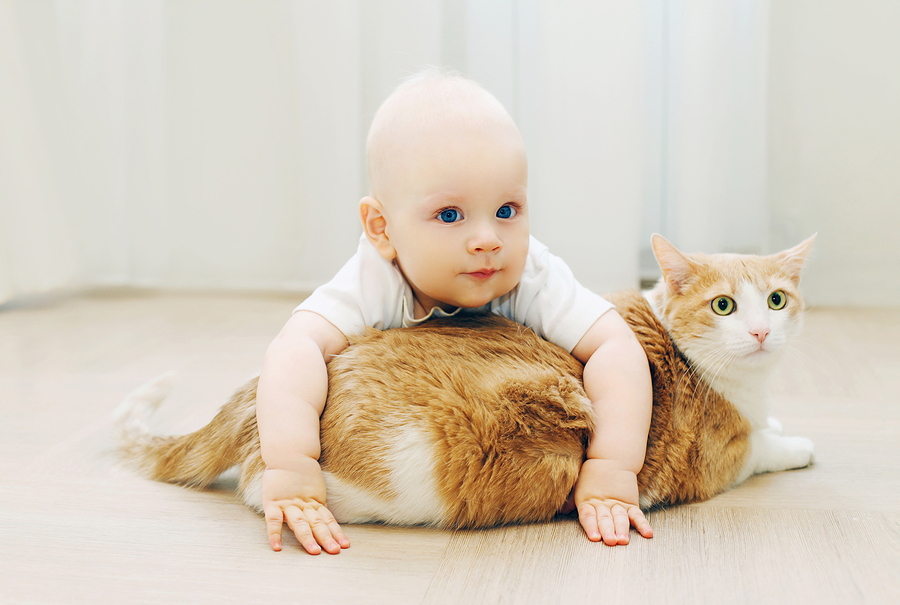 Bringing a new cat into a home with a baby is somewhat different than the reverse, as the cat is not having its space invaded. It could still be wise to acclimate the cat to the baby’s presence, however, such as by sharing objects that hold the baby’s scent.

You can condition a cat to get used to possibly having its tail, fur, whiskers or ears pulled by gently pulling them yourself. Give the cat treats while doing this, however, so that having body parts gently pulled is thought of as a positive experience.

Never leave your baby alone with the cat — animals can act in unpredictable ways. Set up a baby gate to keep the child separated from the cat’s “sanctuary” space, and put mosquito netting over a bassinet or carrier to keep your cat from jumping into it. Play with the cat in the presence of the baby to create positive associations. Keep in mind that a crawling baby can scare a pet. Keep the cat’s food and litter box out of the baby’s reach, as well as the cat’s toys — which could be choking hazards or full of germs. 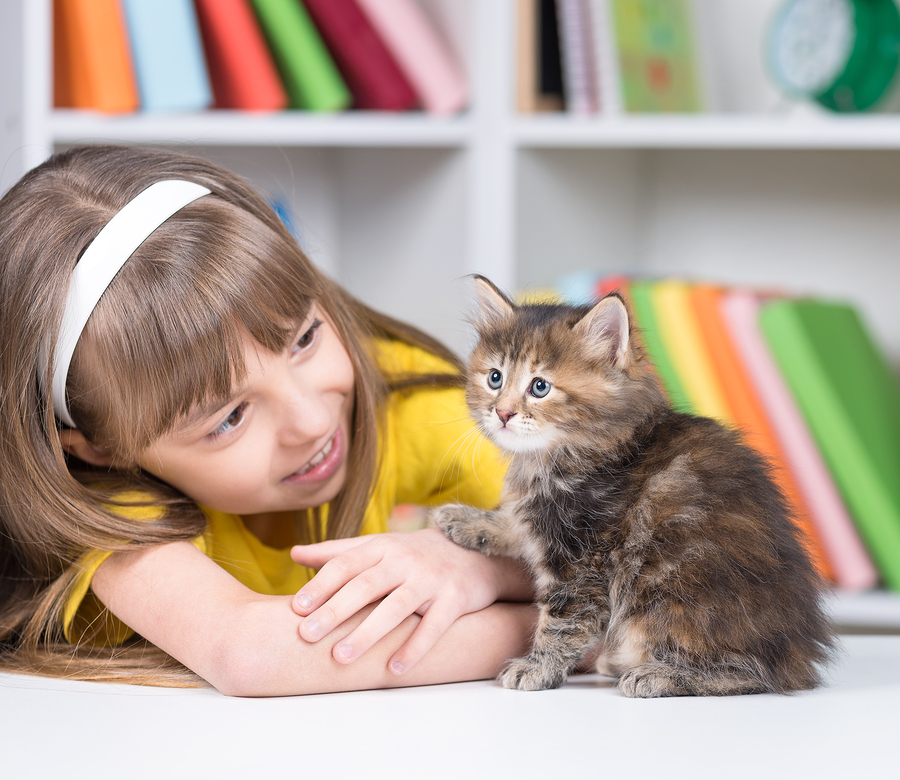 Once the introductory phase is complete, keeping the peace between your pets and children still could require time, patience and work. If your cats’ relationship is still shaky, feed them at opposite ends of the room and gradually move their food bowls toward each other. Consider using flower essences or remedies or a plug-in diffuser with simulated cat hormones to reduce stress and anxiety. Remember that cats prefer solitude sometimes, so spread out a number of safe sleeping places if you have more than one pet. Also, pay attention to litter box locations: A cat should not feel cornered by another cat or the dog while in its litter box. Spaying or neutering your cats also can reduce aggression.