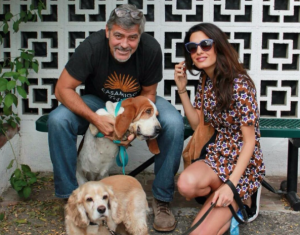 Pet adoption stories are our jam! There’s nothing quite like learning that a dog or a cat has been welcomed into a new home with wide and loving open arms. When celebrities adopt a dog, we get a bit of an extra thrill. Perhaps this is because we envision a previously sad and abandoned little pooch hitting the jackpot and now living like royalty in the lap of luxury. Well, today we are pleased to spread the great news that George and Amal Clooney are the latest famous pet lovers to welcome a deserving pet into their own growing family.

Formerly homeless, Millie, a 4-year old basset hound was discovered searching for food at a California restaurant before being taken to a shelter. Not exactly a puppy, stories like Millie’s don’t always have a happy ending, but thank goodness for George and Amal Clooney. The couple are real-life heroes as they’ve now saved this beloved baby’s life. After searching for a new dog on Petfinder, the Clooney’s fell madly in love with Millie and made her an official Clooney when they adopted her from the San Gabriel Valley Humane Society in California.

It’s been reported that their initial meeting lasted an hour and a half and that the couple didn’t make the decision all on their own. Louie, a cocker spaniel that the couple had previously adopted, accompanied them to the shelter to have his say in the process. We’ve read that the pair got along quite fabulously and that Louie gave his seal of approval before the adoption was finalized.

When it comes to pet adoption, George and Amal Clooney seem to have a special place in their hearts for shelter pets. In addition to adopting Louie and Millie, George adopted a cocker spaniel mix who he affectionately named Einstein in 2010. We are most impressed with the fact that Einstein was not only a “dog of a certain age” (i.e. not a puppy), but poor Einstein had a few pretty serious health problems. Stricken with an underactive thyroid and a dry eye condition, Einstein was also obese. Dogs like these are often the last to be adopted, if at all. We applaud the Clooneys on not just loving shelter dogs, in general, but on making a special effort to embrace those who may not be perfect, but who are just as lovable as any other pet on the planet!

Has another celebrity pet adoption story impressed you as much as this one? Have the Clooneys inspired you to adopt a pet? Please pass this post along and share this good news with the pet lovers in your life. Be sure to also let us know what you think about pet adoption in the comments section below.