Change Location
Email:
Location Info
Request Service
Instagram was made for dogs. Yeah, you’ll find lots of cats on there, but there’s always a feeling that those cat pictures are mostly posted to gratify the owners. A good dog pic is a thing of pleasure for the poster, the beholder, and – you can’t help but think – the dog itself. The inimitable (but much imitated) weredogs of Instagram is evidence of that. 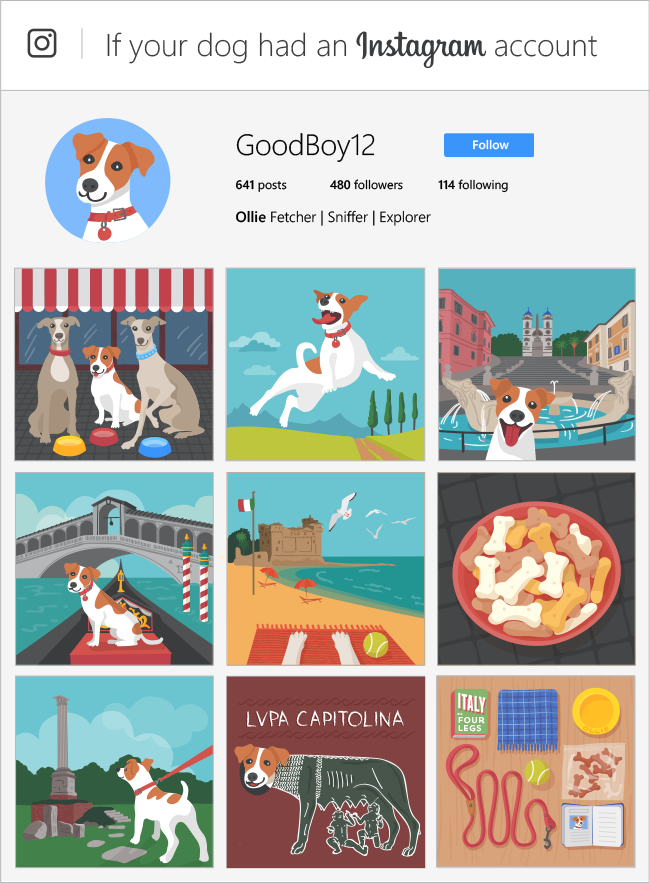 One of the beautiful things about Instagram and dogs is the discipline of the square photo format. Domestic cats are all more or less the same size and shape, so one photo says much the same as the next. But forcing all manner of exotic dog breeds into that square box is an exercise in absurdity, a kind of categorizing exercise that wakes up the inner Victorian butterfly-catcher in us. 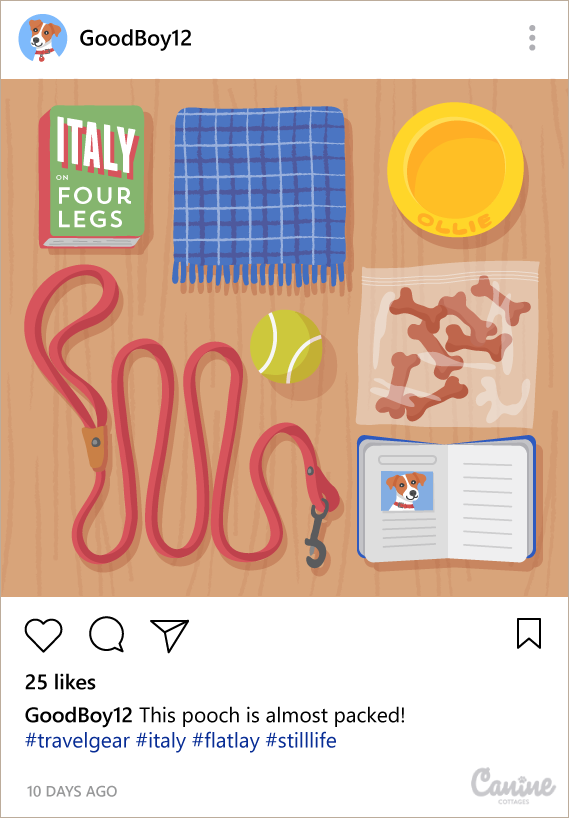 That said, it’s curious to note that a recent bit of “research” by the New York Times revealed that the four most common dog breeds on Instagram are the pug, bulldog, terrier, and chihuahua. That’s four of our squarest-shaped dog breeds. Not a dachshund in sight – the sausage dog was designed for Cinemascope, really.

On social media, everyone’s having a good time 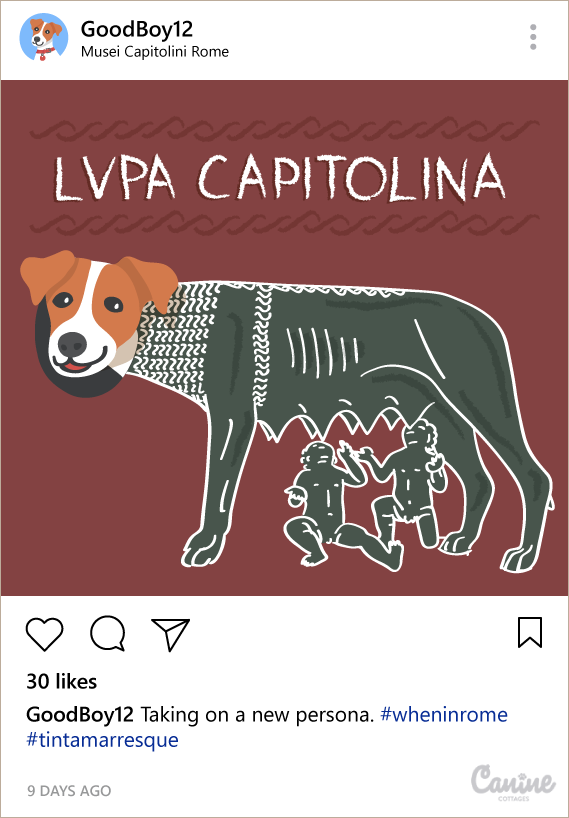 Okay, so not every doggo seems to enjoy being objectified in the name of first-rate social media as much the next pupper. It’s difficult to tell if Menswear Dog truly understands how great he looks in the latest human fashions, for example – is he sulking, or is that just a Zoolander-style male model pout? Lucielle Bull (geddit?) wears pretty much the same deadpan expression whether she’s roaming on the beach or tolerating another of her owner’s costume box inspirations. Occasionally something like a smile reveals that maybe Lucille’s in on the joke (although it’s important to remember when posing your dog, a dog smile is not always a smile). 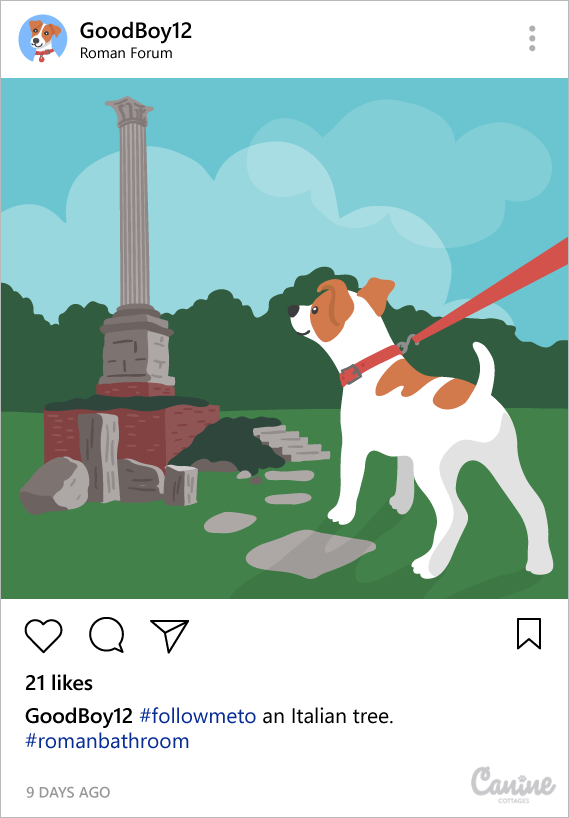 But Lilly, Silas, and Gustav, the outsider pets of Instagram, seem to positively revel in their actualization on social media. If John Waters remade Lassie, he would probably swap out that all-American do-gooder collie for a duo of unconventionally beautiful (and fabulous) freaks like Lilly the Peking Terrier and Silas the Chinese Crested, with their hairless feline companion Gustav the Sphynx.

Putting control back in the pupper’s paws 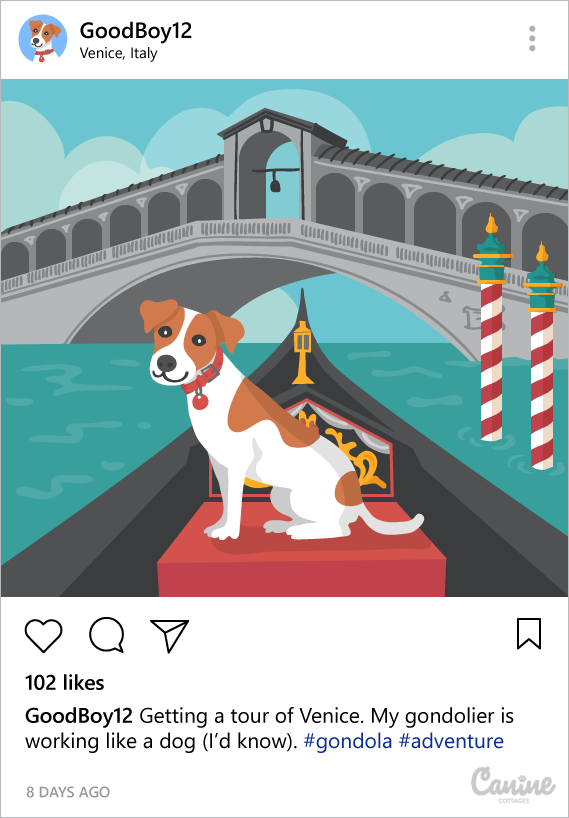 So what would happen if these dogs – or your own loyal pupper – was to take matters into their own paws and open an Instagram account? Surely we can’t be too far away from a dog-friendly selfie stick, after all (be warned: attempting to throw it away would be futile since he’d just chase the stick and bring it back). Well, the good people and consummate dog-lovers at Canine Cottages had just that thought and created this awesome new set of sketches to illustrate just what your dog might get up to with his own social media handle. 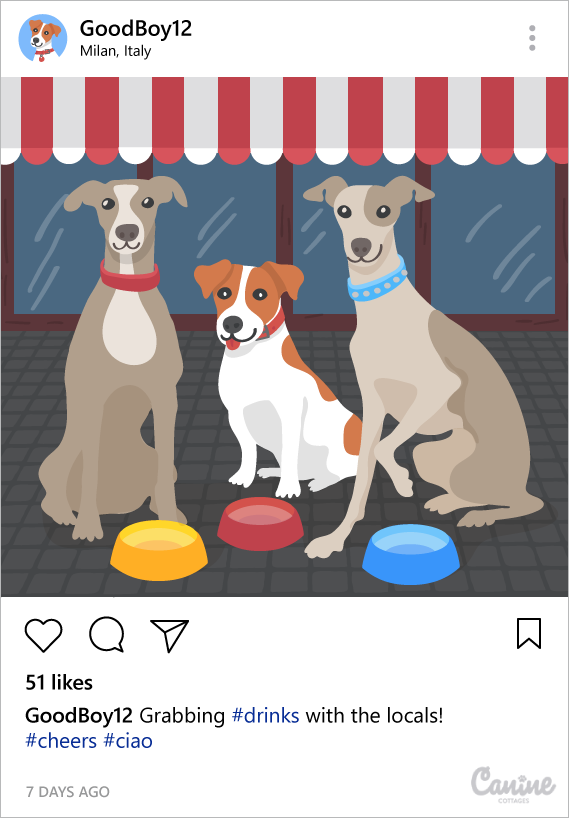 A meticulously-framed flat-lay of his favorite possessions (leash, ball, bowl, treats)? Check. Silly selfies with his head poking through the face-in-hole of a Capitoline Wolf-themed tourist attraction? Gotcha. The obligatory food photo of his evening meal? Naturally.

Inspired? Maybe it’s time to open an account for the four-legged friend in your life!