Everything you need to know about owning a German Shepherd 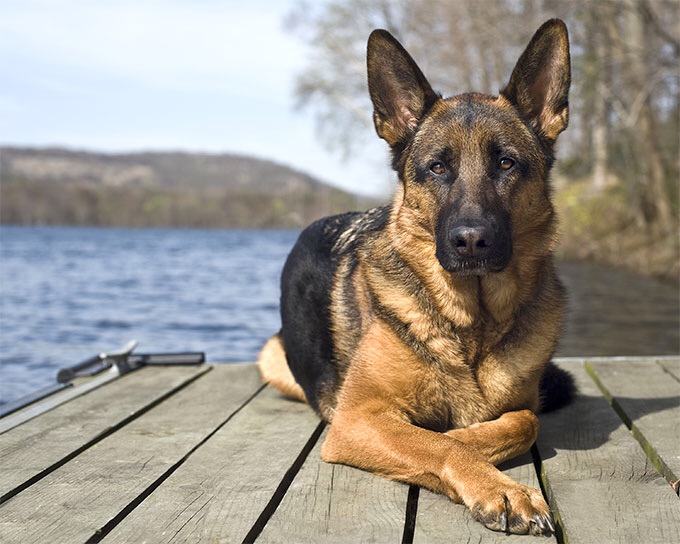 The German Shepherd is a massively sized dog-breed that has its origins in Germany (as the name suggests). They are primarily working dogs, who were meant to guard cattle. Given their tenacity, stunning intelligence, and unyielding obedience, they have always been in vogue in military and police roles in many parts of the world.

The average male German Shepherd weighs about 85-86 lbs and just over 2 feet tall, whilst the female counterpart weighs about 64-65 pounds and is typically a shade under 2 feet when it comes to height. Their litter size is about 5-10 and their life expectancy tends to be around 10-12 years.

The German Shepherd: A Brief History.

Known by a number of other names – DeutscherSchäferhund (the original German name from which “German Shepherd” has been directly translated), Alsatian being the other common ones – the German Shepherd’s origins can be traced back to the mid-late 1800s. As aforementioned, their original role was to safeguard the cattle and protect them from threats. They also played a massive role in the German Army at the time of the first World War.

Things To Consider When Breeding A GSD.

German Shepherds are wonderful creatures and if you are reading this, chances are that you are seriously considering getting one. While that is great news, there are certain things you must know before you decide to breed a German Shepherd. Any prospective dog-breeder would do well to remember that a German Shepherd is not “just another dog”.

In other words, German Shepherds need some sort of activity which will keep their cerebral juices flowing at all times. They will need to be trained meticulously. This is not something to worry about though, as intelligence, obedience, and talent are available in abundance in German Shepherds. They just need to be nurtured the right way.

•First Time Dog Owners May Have A Hard Time

If you are considering getting a German Shepherd as your first dog, then you might want to think again. Without prior experience with dogs and/or outside help, it can be extremely daunting to train a German Shepherd. Given the sheer size and power of German Shepherds, it would be in your best interests to ensure that it is adequately trained. You also want to ensure you are feeding them the right food. Follow this link to learn about which brands of food are best to feed this breed.

•They Require A Lot Of Exercises

They are not like little poodles that you can carry around and pet all day. German Shepherds like to play it rough, whether affection or otherwise.

Forget about any concept of privacy. These adorable creatures will make it a point to tag along wherever you go – even to the bathroom! On the plus side, it is unlikely that anyone will dare to attack you under the watchful eyes of the German Shepherd.

Pros of The German Shepherd

•They Are Very Protective

German Shepherds are extremely watchful and protective. Their sheer size and brute strength is a massive deterrent for anyone who may wish to harm you.

•They Are Sensitive To Human Emotions

They do not say dogs are man’s best friend without reason. This is especially true in the case of German Shepherds. They will pick up your emotions in an instant.

Their high level of obedience means they can be trained and used in combat.

Cons Of The German Shepherd:

•They Shed A Lot Of Hair

•They Are Not Universally Liked

Okay, so this point needs a little in-depth explanation. By no means is it implied that other dogs are universally liked or that you should always factor the likes and dislikes of those over your own. However, if you plan to move into a new place, particularly if It is an apartment, then you will need to be absolutely certain that people will not have issues with the German Shepherd being there. They can be scary, there are no two ways about that! Being very active and energetic, German Shepherds can also get a little overzealous at times. Also, the dogs themselves tend to prefer spacious houses where they have plenty of room to go.

Is the German Shepherd Right For You?

German Shepherds are amazing creatures and only you can answer as to whether the German Shepherd is right for you. If you are ready to give it adequate, training, exercise, attention, time and space, then, by all means, consider getting the German Shepherd. If you cannot do that and/or if you are on a very tight budget, then maybe you will be better off with some other dog breed because the German Shepherd can cost about 1200 USD per year on average (all things included) and that is not even counting any emergencies. They also seem a bit more susceptible to health problems than other breeds.

From a personal point of view, the German Shepherd is the ideal dream dog-breed. It is intelligent, protects the cattle really well and is a part of your family in every sense of the world. However, it is not the ideal dream dog-bred for many others. Read the aforementioned points carefully and then make your decision. Again, from a personal perspective, I would say that the benefits far offset the negatives.

FINAL VERDICT: Acquire this breed only if you can give the German Shepherd it’s due.