FERAL CAT POPULATIONS: 5 Ways that You Can Help 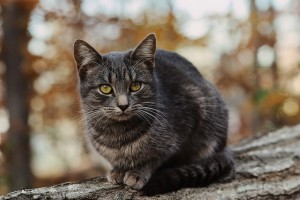 Has a feral cat ever tugged at your heartstrings? Have you ever wished that you could make a homeless cat’s life a little better? Have you ever looked into a deep pair of emerald or yellow eyes and wished you could take that handsome guy home…if he would only let you near him? Well, you’re not alone. Every cat lover on earth has struggled with the idea of feral cats living on the streets and how to help them. Today is our lucky day as Fetch! Pet Care would like to discuss some of the best ways to help a stray or feral cat the very next time you encounter one.

What Is a Feral Cat?

A feral cat is one who has never connected with a human being. Though of a domestic breed, feral cats are wild animals. These cats have never known a home or human friendship and really aren’t looking for either one. This isn’t to say that a feral cat can’t be tamed and become friendly with humans over time, just that you shouldn’t expect to form a strong bond with a feral cat overnight — or ever. If a relationship happens, great, but don’t be disappointed if a feral cat never allows you to get too close.

Feral cats are used to surviving on their own, which includes doing everything from hunting for food to finding safe shelter. But while a feral cat may appear not to need you, this doesn’t mean that you can’t still assist him. A cat like this doesn’t know what he doesn’t know…including how human love and compassion can improve his plight in life.

What Is a Stray Cat?

A stray cat, on the other hand, is one who has been lost or abandoned, who has run away or who has come to live on the streets through some other stroke of back luck. This cat knows what it is like to have a home and a human companion and is probably a lot more receptive to human interaction. While stray cats may give birth to a feral cats and may eventually live among other feral cats, a stray is more likely to be receptive to a new home and a friendly heart than a feral who is distrustful of humans by nature.

While all of the tips we recommend to help a feral cat can also be applied to strays, we want to focus primarily on ferals with the following advice:

One of the best things you can do to help a homeless cat is to have it spayed or neutered. Doing so involves humanely trapping the animal, taking it to a veterinarian for an outpatient procedure and eventually releasing it at the same location where it was trapped in order that it may live out the rest of its days without reproducing. Some advocate for giving male feral cats vasectomies instead of neutering. With a vasectomy, the male retains certain sexual hormones that have been useful to him in establishing his dominance among other feral cats.

As previously mentioned, a feral cat is used to hunting for food on its own. However, a free meal is always appreciated. Feral cats are often considered a nuisance and in some places, like Australia, pretty mean things are done to destroy their populations. This is why we like the idea of feeding them at night when businesses are closed and people are tucked away in their homes. It is at these times when feral cats can eat in peace. Besides, cats are nocturnal by nature, so making an effort to find and feed them at night just makes sense.

In addition to common cat illnesses, feral cats are often injured due to fighting with other cats and predators. Should you encounter a feral in need of veterinary care, the best thing that you can do is contact an organization like the ASPCA or your local animal shelter. Unless you have experience treating a sick or wounded cat, we strongly advise you not to try to do so on your own. A feral animal who feels vulnerable due to his condition is likely to mistake your kindness for something else and may cause you serious harm while merely trying to protect himself.

Feral cats are used to living outdoors and surviving severe weather conditions. This doesn’t mean that he can’t appreciate a warm place to sleep in the winter, though. There are a host of DIY projects which create suitable shelter for these animals. All you have to do is select one that you feel confident in undertaking and go for it. Place the shelter in your yard or on your porch and allow feral cats to sleep there whenever they like. Be careful about leaving food unattended in the shelter, however, as it is likely to attract other wild animals which may harm the feral you are trying to help.

There are a number of groups and organizations who go out of their way to help feral cats. Consider joining one of these to raise awareness about the plight of feral cats in your city. And if there is very little activism on behalf of these cat populations where you live, consider starting one on your own.

Before we go, here are a couple of interesting feral and stray cat tidbits to warm your heart:

Did you know that Disneyland has been home to multiple generations of feral cats since the 1950s? Spotting them in the daytime is difficult, but they do roam the magic kingdom at night when all of the visitors and tourists are gone. They live in the park their entire lives where they are well fed and cared for while helping to keep rodents away…all except Mickey and Minnie, of course! There’s even an Instagram page dedicated entirely to these lucky girls and guys.

Did you also know that Cole — of Cole and Marmalade fame — was actually rescued from a life on the streets? When found alone at a busy intersection, who could’ve imagined that this lonely kitty would become one of the internet’s hottest animal stars? Oh, we’re so happy that this little guy found a fur-ever home, aren’t you?

Whether a stray or a feral cat, these animals have a place in society and deserve to be treated with a little loving-kindness. Now that you’ve given it a little thought, won’t you make an effort to help make a homeless cat’s life a little bit easier? We certainly hope so! We also hope that you’ll leave your best feral cat stories in the comment well below.