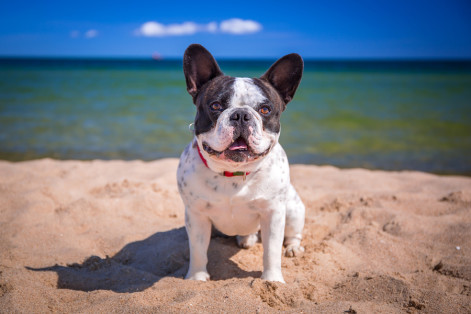 Think a French Bulldog can’t defeat an alligator? Well, think again! Pixel the French Bulldog stars in our latest Video of the Week selection and we think you’re about to be amazed by the skill and strength he exhibits in this memorable battle! Grab some popcorn and call the family to gather ‘round your screen for this most delightful fur on plush match:

As fit and muscular as he is, who would’ve thought that this wee little guy could put such a hurtin’ on this notorious beast? All of us here at Fetch! Pet Care knew Pixel was ready to go a few rounds with the alligator when we caught the excitement glowing in his eyes at the very beginning of the tape, but we had no idea he’d actually prevail in this thrilling matchup! But with all the dogged determination of…well…a French Bulldog he goes on to claim a sweet, sweet victory!

This isn’t to say that Pixel the French Bulldog sailed through this wrestling match, though. Nooooo, this dude put some serious work in! With grunting, panting and growling he went after that gator with sheer vengeance. No one knows what triggered this ferocious energy (maybe these two have a not-so-pleasant history?), but what we just witnessed was nothing short of amazing!

Clearly, we aren’t the only ones who were concerned that Pixel couldn’t pull this match off all by his lonesome. After dragging the alligator onto the sofa and flinging him back to the ground, note the cat lurking by the sidelines at the :45 second mark. Dude was clearly ready to lend a claw if his buddy, Pixel, needed to tag him in!

The alligator’s jungle green eyes wide with fear and determination suggested for just a moment that he would not be conquered by the likes of a cuddly French Bulldog. But after being flung from the sofa a few more times–twisted, bitten and thrashed about–the monster gator had no choice but to surrender to Pixel in the end!

Who is This French Bulldog?

Wondering where this gator-wrestling French Bulldog came from? Well, he’s a bit of an Internet sensation who captured viral gold more than a year ago on his own YouTube channel. As most celebrities do these days, he shares a bit of his everyday life on Instagram and Facebook, too.

Do you have a French Bulldog like Pixel? What are some of the cutest, funniest things she or he has done lately? Can you share a photo or a video clip of your pooch in action? We’d love to hear your stories and be sure to share this video of the week with your friends before you go!