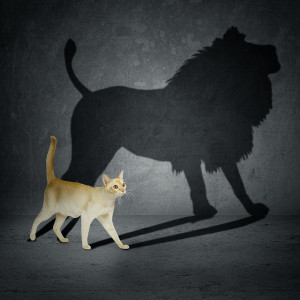 Who will win the epic battle of Kitty versus Shadow Cat? And will any of these stubborn, but mesmerizing, grudge matches ever end? Judge for yourself as you enjoy each fuzzy matchup in the video below. As elusive as each Shadow Cat may be, we don’t think that any of them stands a chance against the little fluffballs you’re about to meet!

A huge round of appaws are due to each of these contenders as they bat and swish their way toward victory over the annoying shadow opponent who appears to mimic their every move. While every cuddly kitty had its own champion style, we especially appreciate the tag team kitties appearing at :55. With the legendary Shadow Cat being such a formidable foe and one who takes on the form of several different kitties, who could blame these siblings for doubling up on the cuteness?

We could spend hours watching fur babies at play– and we often do! It’s nice to be able to share our enthusiasm over these playful kitty sporting events with so many of our faithful readers and fellow pet lovers. And while we don’t like to choose sides (they’re all so adorable to watch), if forced to do so, we’ll take the amazing cats and kittens featured in each match over their spry, but shadowy opponents every day of the week! How about you?

Which contender did you cheer for the most in this clip? Do you have a Kitty vs. Shadow Cat video of your own you want to share? Can you direct us to other pawsitively adorable pet battles that our readers shouldn’t miss? Our comments section is the place to join in on the fun by sharing your thoughts about the fur-tastic kitty match you just witnessed. Oh, and don’t forget to share this post with other pet lovers who will appreciate it as much as we all do!