Meet the Now Famous Cats Of the Keanu Movie

Today, we celebrate the rags-to-riches story of seven newly famous cats currently starring in the hilarious film, Keanu. While you only see one cat in the title role, it actually took seven specially trained fur-lebrities to bring the role of one wittle kidnapped kitten to life. If you haven’t seen the movie yet, we suggest you do so right away. Really, their performances are of the must-see-to-believe variety that will just make you fall in love and leave you awe struck by their abilities. Think cats can’t be trained? Well, think again as you read the story of these magnificent seven! 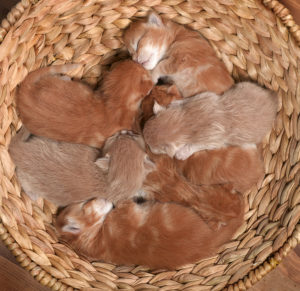 Who Are the Famous Cats of Keanu?

A grand total of seven kittens rescued from various shelters around New Orleans, Louisiana were trained specifically for the role of Keanu. The film’s directors actually started working with three tabby kittens, but those first little fur babies grew so quickly that four more had to be adopted and hired in order to complete the film. When asked why a computer-generated cat wasn’t used to play the title role, the film’s director, Peter Atencio (aka our newest hero), made it quite clear that nothing beats the real thing when working with such fuzzy cuteness! With cats having a reputation for being…uh…shall we say independent and not very interested in taking orders, we applaud Mr. Atencio for insisting on directing these young stars all the way to box office success. Now that he’s proven doing so possible, we hope that we’ll see many more feline-centered films in the future!

How’d They Do It?

Working with two highly experienced animal trainers, Larry Payne and April Macklin, the rescued kittens participated in a solid month of preparation before they began filming. These little guys had to get used to very loud noises and all of the action taking place around them without becoming startled or afraid. Within a month’s time, these purr-fessionals also became experts at dodging fake bullets during shootout scenes, running for cover and looking oh so adorable in every single frame! The now famous cats also had to learn how to tolerate various wardrobe changes as Keanu was often decked out in cool leather jackets, snazzy hoodies, miniature do-rags and funky fake gold chains.

Eventually, it became clear to their trainers that some of the kittens were naturals at playing certain parts. For example, one would be really good at running for cover, another at sitting on cue, another at making cute little meowing sounds when needed and others at the ever-important task of cuddling. This meant that the film’s human actors had to accommodate several kitty changes as these different furry thespians switched places for various scenes.

We want to give a warm thank you to all of the humans who helped these famous cats find success in their film debut. This includes Director, Peter Atencio, of course, as well as its stars Jordan Peele and Keegan-Michael Key. We’re even told that Key has a serious cat allergy and had to be medicated during the entire filming. He seriously took one for the team and we are so grateful that he did! We also give major props to the dedicated team of trainers and vets who worked so closely with these rising stars (including the rep from the American Humane Association who was always on set to ensure their safe handling).

Most of all, we’re grateful that these seven former orphans now have furever homes as one, now named Catonic, was adopted by another of the film’s actors, Tiffany Haddish. The other six highly trained purr-fessional actors will continue their Hollywood careers. As they await their next gigs, two live with trainer Larry Payne, two with another trainer April Macklin and two live at a beautiful California ranch which is home to other famous cats, dogs and other animals who act.

What Do You Think?

Have you watched these famous cats do their thing in Keanu, yet? What did you think of their performances? Tell us your thoughts on these famous cats, their rescue and the movie in the comments section below. And don’t forget to share this story with your social media friends using the hashtag #fetchpetcare so that we can join you in conversation there.