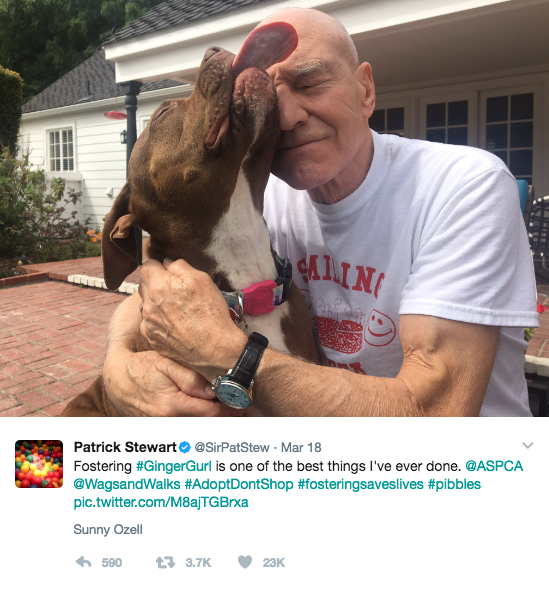 “Oh there she is!” he gently exclaims as he sees her coming up the driveway to his house. Stewart opens the door and sits on in on the floor of his doorway gently petting a wiggly and affectionate Ginger who is adorning him with kisses: “That’s a very nice greeting!” He remarks with a big smile on his face.

Stewart and his wife, Sunny Ozell, teamed up with The American Society for The Prevention of Cruelty to Animals (ASPCA) along with Wags and Walks to foster Ginger (aka #GingerGurl). Ginger was rescued by Wags and Walks from a PitBull breeding ring in Los Angeles.

The two have now become the best of friends — a bond that is being documented on his Twitter Page (@SirPatStew) with near daily updates. It really just does not get any cuter than these two…

Here they are going for a walk together…

In an attempt to teach Ginger to swim, Stewart discovered that Ginger would much rather kiss his bald head.

And then of course there’s this. Stewart lovingly pets Ginger to sleep before giving her a goodnight kiss on the forehead. In his tweet he writes: “From what I understand rules and consistency are everything as a foster dog parent.”

From what I understand rules and consistency are everything as a foster dog parent. #GingerGurl @ASPCA @WagsandWalks #AdoptDontShop #pitbull pic.twitter.com/aCvKtwlxSA — Patrick Stewart (@SirPatStew) March 10, 2017

“So what we have here is a 60 lb. lap dog,” said Stewart’s wife, Sunny Ozell, who shared a video of Ginger cuddled up in her husband’s lap. Stewart and Ozell fell in love with PitBulls after meeting their neighbor’s dog Sadie. “Thank you @ASPCA and @WagsAndWalks for connecting us with this gorgeous being. We’re already in love.” Ozell writes on Instagram.

Want to know more about Ginger and how to adopt her? Visit her page on the Wags and Walks website here.