Ray the Cat Has No Time For Your Trendy Avocado Toast 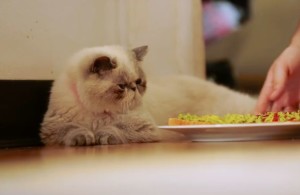 Rising internet sensation, Ray the Cat, has done it again with a new video release. This time the review is of avocado toast, which this feline is clearly is not a fan of. Looks like we can add that to the list of things that Ray just can’t go there with like craft coffee, green juice, fancy-schpansy donuts and lemony kale salad. While Ray the Cat made a good effort at trying something new, this trendy avocado toast thing just isn’t going to fly with such a discerning kitty palate. Check Ray’s video review out and see for yourself:

Ray the Cat Has No Time For Your Trendy Avocado Toast

Who is Ray the Cat?

This Brooklyn-ite is an up and coming star who has only just begun to shine. A current reviewer at the popular food website, Delish, Ray has gained the reputation of not being easily impressed with chichi fare, no matter how popular it is with the masses. With a respectable following on Instagram, the world is taking a serious liking to Ray the Cat, so she’s definitely one to watch! And, no, that wasn’t a typo. Ray is all girl, but she doesn’t play by gender rules…even with the spelling of her own name.

Back to the avocado toast though, from the video it’s clear that Ray rose early to give it the old college try. She even went so far as to help her roommate make the toast as we see her pressing the lever down in anticipation of a good healthy breakfast. Maybe it was the sight of mashed avocado or perhaps it was the scent rising from the toaster, but Ray the Cat tussling with the appliance’s cord may have been the first cue that she wasn’t going to go there with the avocado toast.

After getting close enough to take a single whiff, Ray the Cat had drawn her final conclusion. She’s definitely not a fan of green mush atop warm crusty bread. Looks like we’ll just have to add this to the growing list of things that Ray can’t even spare time for.

What do you make of Ray the Cat? Have you seen her other video reviews? Does your cat agree with Ray on avocado toast? We’re looking forward to reading your thoughts, so feel free to express your opinion in the space provided below.