Hurricane Harvey was a category 4 hurricane when it hit the Texas coast on August 26, 2017. Ahead of the powerful storm families all throughout the coast were making plans to evacuate or were already in the act of evacuating.

For those families who couldn’t take their pets with them to safety, many had to surrender their pets to shelters in hopes they’d be protected or just leave them behind altogether. Even for the families that did stay behind to ride out the storm, once an animal is afraid, they will potentially flee to run away from danger.

Some pets were lost, surrendered or simply just disappeared as Harvey pummeled the coast and dropped over 7 trillion tons of water onto the Texas coast. These are just a few of the stories of families being reunited with their lost pets, proving that even through such destruction, there can be a happy ending. 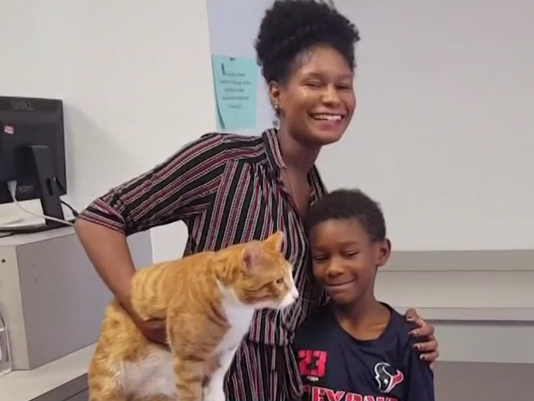 As flood waters began to rise and evacuations were immediately necessary, one Houston family had to leave their beloved pet cat Garfield behind. The Wyndham’s were so worried about their cat that they called the Houston SPCA to check on the cat and send in rescue if necessary. Luckily, the Houston SPCA did send out a rescue and found Garfield, eventually reuniting him with his family at the shelter in Houston. Many shelters did open their facilities up to families that either wanted to surrender their pets or acted as drop off locations for stranded pets found throughout the city. The Wyndham’s and Garfield are now happily back together and starting to rebuild their lives.

Best Friends Animal Society is just one of many animal welfare groups that are actively helping families throughout Texas reunite with their pets. Since many of these terrified fur babies were left stranded or fled the flood waters, so many displaced animals are being found in abandoned homes and on the sides of soggy streets. With the help of animal welfare organizations as far as Utah, many families are being reconnected to their pets which were kept safe by various shelters and good Samaritans. Most of this time is being volunteered so that families who did have to evacuate can find their pet once they have settled themselves. Internet groups, social media posts, and pet catalogs are also being used to help people reconnect with their lost pets.

The star in one of the most viral Hurricane Harvey photos, Otis, the wonder dog who went out and found his own bag of dog food to wait out the storm, was reunited with his owners after the photo was shared on various social media platforms. Otis reportedly went missing the day Hurricane Harvey hit, but through the reports of neighbors and locals who knew the dog, his owner Salvador Segovia was able to keep an eye out for him and await his arrival back home. Turns out Otis just wanted to make sure he had enough food to weather the storm, as he was headed back home to reunite with his family with a huge bag of kibble in tow.

Cash reportedly jumped into a storm chaser’s car to avoid the hurricane and find a safe spot to dry off in. Self-proclaimed outdoorsman Aaron Jayjack was on a pursuit following the storm when Cash jumped into his vehicle. With the help of social media, the dog (Cash) went viral and ultimately ended up reuniting with his family. The dog, who Jayjack named “Harvey,” apparently escaped his home once the storm hit and through Jayjack’s help was reunited relatively quickly with his family. His family was happy to see him and grateful for Jayjack’s help. This is a perfect example of how powerful social media is and how useful it has become in terms of reconnecting lost loved ones – including precious pets.

Cameron Berger had to place his 4-year-old German shepherd Emery into the care of his neighbors in Corpus Christi, TX when leaving for a trip to see his father in Washington. While out of town, the hurricane struck and his neighbors were forced to evacuate their home due to rising flood waters. Emery was placed into care with a pet sitter in Corpus Christi until Berger could figure out what to do. He had lost everything in the storm, including his home and business. A pet relocating agency was contacted to help Berger move Emery to California where his father lived. After a long, but highly successful process, Emery was finally able to take a plane ride to meet Berger at an airport in California and be at peace with her family again. They are all back together and Berger is planning their new lives in the Golden State.

Hurricane Harvey did much more damage than just destroy people’s homes and businesses; many pets were displaced and left behind. Harvey has been compared to hurricane Katrina in terms of devastation, but also in terms of valuable lessons. Since Karina, more organizations knew how to handle disaster and pet relocation. An incredible amount of shelters did not allow pets into the facilities so owners had to leave their pets in shelters or leave them at home and hope for the best. With the aid of rescue crews and animal welfare organizations, people were able to describe their pets to their evacuators before being sent off to the shelter. In many cases, rescue crews were able to go back into the wreckage and find the endangered pets. For those who didn’t want to leave their pets at a shelter or at home, some just camped out in front of shelters that refused to let them inside. Instead of having to leave their pets anywhere they felt happy knowing that their entire family was still together and safe.