Noted CNN news anchor, Anderson Cooper, suffered a devastating loss a few months back when his beloved Welsh Springer Spaniel, Molly, passed away. After 11 years together, we can only imagine how devastated Cooper must have been by her demise. Dog lovers everywhere offered their kind words of support and comfort after the sad news was shared on the journalist’s personal Instagram account. As life goes, though, good news often follows bad, which is why we’re proud to tell you that Anderson Cooper has opened his heart and home to a brand new puppy whom we hope he gets to share many, many years of warm hugs and wet kisses with! 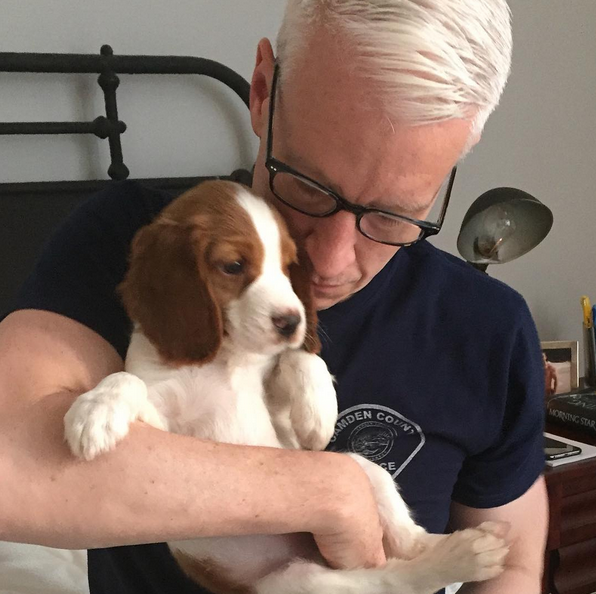 Just as Anderson Cooper shared his mournful news on Instagram, the popular anchor returned to that same platform to share the amazing announcement that another Welsh Springer Spaniel named Lilly was now a new member of his family. Anderson’s timing was perfect, too, as he shared the photo of his new bestie on last month’s National Pet Day. Judging from the cuddly pose and Anderson’s true love of animals, we know that the two are already the best of friends!

Like her late older sister, Lilly is also a Welsh Springer Spaniel. Not to be confused with the English Springer Spaniel (they are two totally separate breeds), the Welsh Springer seems perfectly suited for Anderson Cooper as they are known to love the great outdoors and their feet are even slightly webbed giving them an advantage when engaging in water activities. Anderson has often expressed a love for adventure and travel, so we’re sure that Lilly will be a beloved companion at home and on the go!

Whether you’re an Anderson Cooper fan or not, you probably already know plenty about him. From his famous heritage as the son of Gloria Vanderbilt to his rise to success as a journalist despite having a mild form of dyslexia. But did you know that Anderson is also a compassionate lover of dogs even beyond his own? Nothing speaks to this fact more than his purchase of ballistic vests for the entire K-9 unit of the Virginia Police Department after the loss of one of their furry comrades.

Has Anderson Cooper Inspired You?
Anderson Cooper moving on with a new pet is something we greatly admire. Anyone who’s ever lost a pet knows that there simply is no such thing as “replacing” a furry family member. We also know, however, that a serious void needs to be filled with a new pet after a period of mourning has passed. Have you lost a pet and has Anderson’s story inspired you to adopt a new one? Would you prefer to adopt a puppy or a more senior pet? Tell us your thoughts and feel free to share your stories below.