After the fun and frivolity of the holiday, I feel the guilt over the extra pounds, extra couch time, and extra fun. I feel extra pressure to set some goals for the New Year so I can get my life “back on track”. Spending time with my dog, Peyton, is at the top on my resolutions list. 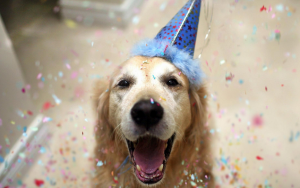 Tasha Eurich, Ph.D. says in her article, “The Science Behind Successful New Year’s Resolutions” that there are a couple of secrets to keeping your resolutions. One way to be successful is to work on only one thing at a time. Eurich reminds us that the late Stephen Coveyadvocated putting first things first, pick the resolution that will give you the biggest payoff and work on only that. I know that the time I spend with Peyton is always has the biggest payoff for both of us.

When training Peyton, I found that instead of teaching him to quit doing something, it was much more productive to have him learn a behavior that is more desirable to do instead, for example, he loves to chew. Instead of chewing up my shoes, I have provided a lot of other choices of chewies and taught him to find one when he needs to chew. Dr. Eurich says that the same can be done for humans. Maybe I can change my clothes when I get home from work and take Peyton for a walk instead of sinking into the couch and then trying to talk myself into getting up and getting out again. The extra incentive is that when Peyton realizes that this is routine, he will encourage me to continue walks when I get home from work. I know he won’t give up easily!

Finally, Dr. Eurich recommends that I practice my resolution every day A research study by . K. Anders Ericsson, Michael J. Prietula, Edward T. Cokely and Daniel Coyle all show by research that greatness isn’t born, it is achieved by consistent practice every day. They proved that marathon runners don’t have any different bodies than anyone else, they just train every day for the months leading up to the marathon. Not only will I do walks with Peyton regularly, I can do more challenging activities for both of us.

What will we do next?! My mind goes directly to running a marathon. Peyton could do that with me, except I don’t like to run. I watch the dogs on television that dance and do tricks. I think we could do that. And maybe we can if we are consistent and I’m realistic enough to know it isn’t my personality. So what will work for us? So I decided to consult with Sam the Trainerto see if he had some basics skills that every adult dog should have. He said that every dog should be:

✔ Well socialized: good with me, family, friends, strangers, and other animals in any setting
✔ House trained: 100% trustworthy indoors
✔ Well-mannered: in home and in public
✔ Obedient: able to do sit, down, heel, come off leash and with distractions, obedient up to 100 yards from me and even if he can’t see me

Ok that gives me a few things to work on!

Sam the Trainer has some advanced skills that we can work up to like agility (I think we’d love to do this), retrieving on command and tracking.  This could be overwhelming. Then Sam the Trainer gave me some more advice, “Note that none of this comes automatically. To get the most out of your dog takes planning and effort.”
Karen Pryoris a clicker trainer (which I find fascinating), and she says that teaching nose targeting is the most important skill. For those of you who aren’t familiar with nose targeting, it is essentially a building block in dog training where the dog is taught to touch it’s nose to a target being held close to the nose. Karen says that if a dog has the nose target skill then you can substitute it, in a pinch, for another skill the dog has yet to learn. I’ll be looking into her book, “Fired up, Frantic, and Freaked Out”.

I know there is still a lot of research I need to do and then I need to come up with a written plan with a schedule. I also know that planning for our future is one of the most rewarding things I will do for both of us in the coming year.