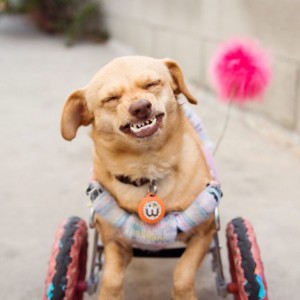 Sheena was looking for a dog when she found out the terrible secret that most animal shelter’s don’t share: animals with disabilities are often euthanized instead of adopted. It was then Sheena decided to adopt a dog with a disability.

Daisy was dumped on the street as a puppy, probably because she was born with deformed front legs. That kind of deformity is common among bad breeders that inbreed. Most often the breeder’s “mistakes” are also euthanized immediately.

The gift is that this ever-happy dog is sharing her inspirational life with the world. With Sheena’s help, Daisy has become an Instagram sensation. Her smiley face is on many images is punctuated with a flower wreath on her head and her colorful wheels that help her run.

Sheena has a new project. She is in the process of getting Daisy some 3-D printed legs like Derby runs on. Sheena hopes that someday Daisy will also run as fast as she can in any direction and she hopes that prosthetic legs will help her do that.

In the meantime, Daisy celebrated her 5th birthday on Instagram and on the web. This little superstar is changing the world and helping other people see how wonderful dogs with disabilities can be as family members.