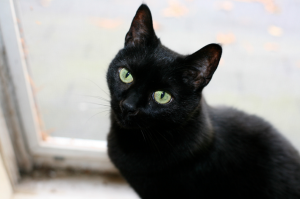 Along with our friends across the pond, we want to wish you all a very happy Black Cat Day! Whether you are lucky enough to have one in your home or if you just love all cats of every color, we hope you’ll join in on the celebration by remembering to snuggle with your precious kitty and remind him of just how special you think he is. Today being Black Cat Day, though, we thought we’d dedicate this entire post to the myth and the majesty of black cats throughout time.

Fetch! Pet Care rejects the bad rap that these dark furry felines get, especially at this time of the year. We want to do everything in our power to make life a little easier for them. How do we intend to do this? Well, by explaining the origins of some of the short-sighted myths associated with these cats. Hopefully, our doing so will help you appreciate the great beauty of every black cat you meet from this day forward.

The Serious Plight of Black Cats

Let’s start with a few black cat facts, shall we? Did you know that black cats are adopted at a lower rate than other cats are? Did you know that a black cat is more likely to be euthanized than a cat of another color? The negative ways in which these innocent cats are viewed by some appears to have serious consequences to their population, overall. 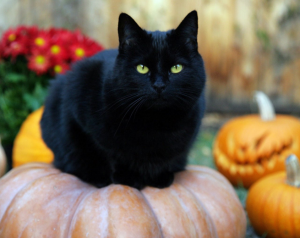 Where Does Black Cat Prejudice Come From?

A number of myths surrounding black cats have prevailed throughout history. All have been based on nothing more than ignorance, superstition and coincidence. There is absolutely no real reason to discriminate against these black beauties!

Here are just a few of the most common myths and a little background on how they originated:

The bubonic plague, also referred to as the Black Death, devastated medieval Europe. A vilification of cats, specifically black cats who were associated with the epidemic, caused many innocent felines to be killed as the plague raged on. Of course, the plague was spread by diseased rodents so as cat populations decreased, incidents of death by plague only increased.

During the 16th century, many Italians also viewed black cats as a deadly enemy. They believed that one jumping on the bed of a sick person surely meant that that person was going to die.

Witch, Black Cat or Both?

The myth of the black cat being associated with witchcraft was introduced in Europe during the middle ages. Stray cats, many of which were black, were often cared for by older women. These women were sometimes accused of witchcraft. By pure association, black cats, then, became associated with evil and sorcery.

One night during the 1560s, a father and son encountered a black cat who quickly hid from their presence. The pair began to toss rocks at the helpless and frightened feline who then scurried for safety into the nearby home of a woman who many already suspected to be a witch. The following day, the woman was seen limping and had visible bruises. This coincidence caused a superstitious many to believe that the woman had transformed herself into the cat during the night.

In America, a fear of black cats was also perpetuated during the Salem witch hunts. In fact, if a “talking” black cat was found in the home of a girl or woman accused of witchcraft, this was used as evidence of her guilt. Now, while some cats are very vocal, there isn’t one shred of credible evidence that a talking cat has ever existed, much less a talking black cat. But we’re talking about the Salem witch trials, here, not exactly among the most fair, balanced or logical period’s in history.

Art and the Black Cat Stereotype

Literature, Hollywood and even Halloween certainly haven’t helped the plight of black cats. Often depicted in the arts as mysterious and evil creatures, ebony cats have certainly gotten a bum rap. This bad reputation is why many people, even cat lovers, still avoid them to this day.

From Edgar Allan Poe’s short story The Black Cat and the film adaptation of that work, to the many times that cats have been depicted on stage and screen as nefarious creatures, we begin to see a pattern which certainly underscores the anti-black cat sentiments that are still so popular today.

This week, as we count down to Halloween, notice the many times that a black cat is featured in a spooky advertisement. Consider, also, how many times a photo of a black cat dressed in a witch costume crosses your social media timelines. While many pet owners mean no harm with such cat costumes, photos like these do help reinforce the black cat’s connection to witchcraft and sorcery. In fact, myths surrounding black cats, especially at this time of year, are so dangerous to these helpless kitties until some, like the Humane Society of West Texas, will not even allow black cats to be adopted as Halloween draws near. 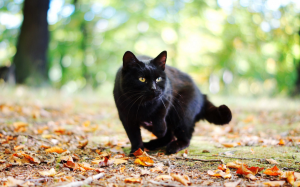 Early pirates may have been bad guys, but they sometimes thought highly of black cats. These men thought that a black cat walking away from you was a sign of good things to come…never mind, for now, that they also thought that one of these pretties walking toward you was bad luck.

Today, black cats are also appreciated in some parts of the world. For example, in Japan, a black cat is actually a symbol of good luck. In Scotland, a black cat showing up at someone’s home denotes prosperity. And, as we mentioned in the beginning of this post, October 27 is actually Black Cat Day in the U.K. Here in the U.S., we even have Black Cat Appreciation day every August 17th. And, of course, we cat lovers know that owning any cat at all, even a black one, is just good our good fortune, period.

Our parting gift to you on this wonderful Black Cat Day is a few lovely facts about these majestic animals. For instance, did you know that the majority of black cats are male? It may also interest you to note that melanism, which is the exact opposite of albinism, is responsible for the black pigmentation found in black cats, dogs and other animals. Melanism is believed by some to strengthen an animal’s immune system and it is also responsible for black cats having yellow eyes. Pretty cool, right?

Remember to participate in #BlackCatDay on all of your social media channels today. If you want to thank Cats Protection for creating this awesome day in honor of black cats, give them a warm shout out on Twitter @CatsProtection. Be sure to tell them that @FetchPetCare sent you!

Introduce Us To Your Black Cats

Do you own (and we use that word loosely here) a black cat? Has your cat brought you good or bad luck? Or has your cat brought you no particular luck at all, but has bestowed you with lots of love and happiness which is just as good? Post a picture of your black cat and tell us a little about him before you go. And please remember that our professional pet sitters are always happy to lend a hand whenever you and your black cat need us.